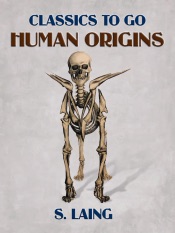 Excerpt: “Down to the middle of the nineteenth century, and to a considerable extent down to the present day, the Hebrew Bible was held to be the sole and sufficient authority as to the early history of the human race. 2 It was believed, with a certainty which made doubt impious, that the first man Adam was created in or about the year 4004 b.c., or not quite 6000 years ago; and that all human and other life was destroyed by a universal Deluge, 1656 years later, with the exception of Noah and his wife, their sons and their wives, and pairs of all living creatures, by whom the earth was repeopled from the mountain-peak of Ararat as a centre. The latest conclusions of modern science show that uninterrupted historical records, confirmed by contemporary monuments, carry history back at least 1000 years before the supposed Creation of Man, and 2500 years before the date of the Deluge, and show then no trace of a commencement; but populous cities, celebrated temples, great engineering works, and a high state of the arts and of civilization, already existing. This is of the highest interest, both as bearing on the dogma of the Divine inspiration of the historical and scientific, as distinguished from the moral and religious, portions of the Bible, and on the still more important question of the true theory of Man's origin and relations to the Universe. The so-called conflict between Religion and Science is at bottom one between two conflicting theories of the Universe—the first that it is the creation of a personal God who constantly interferes by miracles to correct His original work; the second, that whether the First Cause be a personal God or something inscrutable to human faculties, the work was originally so perfect that the whole succession of subsequent events has followed by Evolution acting by invariable laws. The former is the theory of orthodox believers, the latter that of men of science, and of liberal theologians who, 3 like Bishop Temple, find that the theory of "original impress" is more in accordance with the idea of an Omnipotent and Omniscient Creator, to whom "a thousand years are as a day," than the traditional theory of a Creator constantly interfering to supplement and amend His original Creation by supernatural interferences."